Staying in a Château, is a like staying in another era.

Such places, steeped in history, take us on a calm and peaceful journey.

The history of Château Belle Epoque

The history of Château Belle Epoque dates back to 1762. At that time, Belle Epoque was not a château but a large bourgeois house with a clock above the main door. It was built by the Lassalle family who lived there until 1837. At that time the house was called « Pigeon ».

Between 1837 and 1861 different proprietors came and went without making any changes to the house.

In 1861 the house was bought by the Saint-Jeours family who added two turrets to each side of the house.

In the village, the house became know as

A young woman of the Saint Jeours family, on marrying Auguste COYOLA would then change the destiny of the château.

Between 1920 and 1925 Mr Coyola raised the house to the ground and built in its place the château as it stands today, with its neo-renaissance style.

It then became « Château Coyola ».

At that time, Château Coyola had a private washhouse on the banks of the river Binaou that runs through the estate.

The large crenellated tower on the south side of the Château echos the work of the architect Viollet le Duc. On the estate there were stables, designed by Gustave Eiffel, which remain today a rare and exceptional building in the Nouvelle Aquitaine region.

The château remained the property of the Saint Jeours - Coyola family until 1972.

There are few traces in history of the illustrious people who visited the château, but we know that the Bao-Daï Emperor was here as well as possibly Napoleon III. This is plausible as he originated and upheld the law of the 19 June 1857, which obliged communities and property owners to clean up the area and seed.

At a later date Mr Berger (following another proprietor) carried out the renovations to transform the château and its outbuilding into guest rooms, a swimming pool and a tearoom.

He then gave the château its current name, Château Belle Epoque,  that comes from the road that runs alongside the estate.

The magnificent old stable buildings became gîtes but have kept their original structure that you can still admire to this day.

In 2009, after a lucrative career as an industrial company executive, Mr Christian CONQUAND, wishing to change professional direction, visited the estate that was for sale, and became its new owner.

He and his wife, Malika continued to run the guest rooms, gîtes and wedding receptions for another 10 years.

They also opened an Italian restaurant in one of the houses on the estate, called « La Landaise » dear to Malika who had lived in Italy for 20 years. The restaurant remained open to guests until end of September 2019. 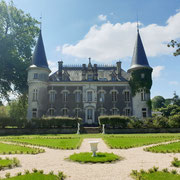 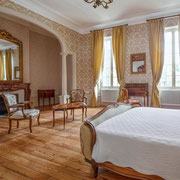 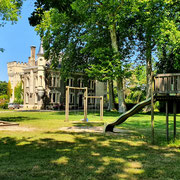 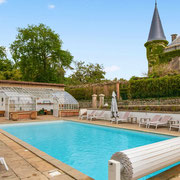 In 2019 the estate was resold and the management entrusted to Melanie and Samuel, to continue the work of the previous owners.

You can enjoy the swimming pool, tennis, various play areas, the lake…

Your hosts are full of new ideas but always maintaining respect for the estate, in order to make your stay even more pleasurable.

A satisfaction survey will be available so that you can leave feedback and suggestions of how we can improve on your stay with us.

Samuel oversees the upkeep of the estate.  He is everywhere to help you.

Morgane is here to welcome you, answer any questions you may have and advise you on any activities that you may want to undertake.

Please don’t hesitate to contact us for any information you may need.